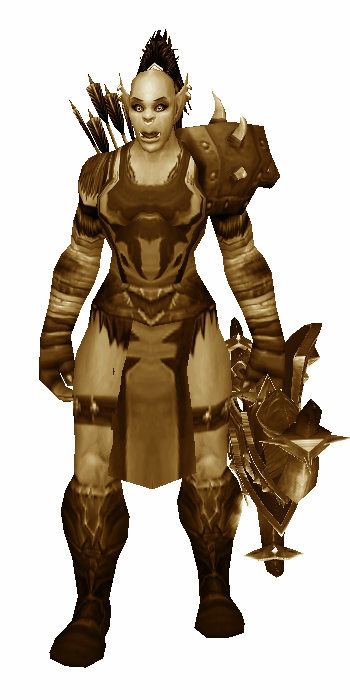 Agara Boarheart is the vicious sniper working for the Stormrise Warband in its push for blood and war on the snows of Northrend.

With the blood of the Boarheart family in ones veins there comes a certain expectation. To be a humble, steady backbone to the horde, reaping glory onto the families name as great and competent warriors for the horde. Hailing from the Frostwolf Clan, the proud and efficiant scout Garglave Boarheart was one of the few to follow Thrall to the founding of Orgrimmar. The old scout raised in rank as a seargent under the banner of the new horde, and later as a deep scout in the wilds of Azeroth. It was the old orcs greatest desire to die in glory under the command of the Warchief. To Orgrimmar he brought his family, raised harsh so that they'd be survivors. Great warriors to bring the Frostwolf Clan much glory. From Garglave came 12 children over his long lifetime and two wives (the first dieing in combat, Garglave took a second mate years after to watch her die of age). Agara would find herself the second youngest.

With this knowledge one can easily assume how a headstrong, disrespectful and amoral runt of the litter may fit in. Being the smallest and thinnest in stature, Agara found herself needing to use her brains and cunning to survive her upbringing. Though her father tried to steer her to a better path, the child became cruel and rather vicious. More yet, the orc was untamable, indomitable. A black mark on the family name who cared nothing for service, honour or glory. This eventually lead, after an act that almost cost the life of her younger sister due to a plan that included wounding the girl and leaving her for bait, to her exile.

Agara spent nearly four years in the wilds. Not alot is known of her time there. What is known is that she became a mercenary and spent quite a bit of time working out of Grom'gol in the wilds of Stranglethorn (This is further confirmed by Hemet Nessingwary who Agara persued into Northrend in search of a payment owing). Later she would be found in Outland working for the Mag'har by sniping Draenai off the cliffs of Halaa while harassing the boarders of Telaar by civilians as a means to draw out warriors.

It is not known by many what brought Agara back to the horde and to Orgrimmar. The truth however was grave. She'd made her way to the snows of Northrend in search of more financial gain at the expense of life and while there had caught wind of her fathers presense in Dragonblight. Assumed to be missing in action, the advance scout hadn't reported since the the first landing of adventurers on the shores of Borean. After a long search, Agara tracked the body of her father. It was clear that he'd fallen to a Nerubian ambush on the peaks of that region, though his trained warbeast still survived. Keeping its master's corpse protected from scavengers, the beast was surrounded by dead Nerubians.

After burning his corpse alone, Agara returned to the horde by accepting an agreement between her and the Warcaller of a marauding warband that had been carving its name and place in the new frontier. A great opportunity for profit which has so far worked well, though trust is stretched thin on both sides of the agreement, for obvious reasons.

Agara is what most orc women would consider scrawny, the runt of the litter. Thin and toned, the huntress has a wiry frame built for agility rather then strength. The rather vicious sneer often adorning her features and general undirected spite promises however that what the girl lacks in strength she more then makes up for cunning brutality. Even so, she might be considered attractive by the standards of a race who doesn't put such value on strength if her pleasing stature wasn't completely overshadowed by her savegry, lack of social grace and blatent rudeness. She exudes an aura of indepenence and unaprochability.

In temporate climents the girl can be found in unrestrictive clothing that she found nessisary in the Stranglethorn jungles and seems to still favor the lightly armored garb. However in the fridged climates of Northrend she can also be found wearing full battle armor tailored for seasoned veterans of her profession. Her hair is often pulled up into a topknot, while her ears and nose carry piercings.

By her side is often found a large powerful lion, battle scarred and war torn it is clear that the beast has even possibly seen more battles then its mercenary master.

Rude, arrogant seeming and totally straight to the point of a matter. Agara seems to speak straight to the point, straight from her mind. In conversation she is often silent before tacticly choosing insults and barbs to fire down upon friends and foe alike. She has been known to spit on people who attempt friendly conversation with her, walk away mid conversation for no apparant reason and generally show a disregard for anyone and anything. It is quite clear that even though her race believes shes weak and honourless, she considers herself superior to all of them.

She meets challenges with a sneer and immediate action, seeking the most direct means to end a conflict, situation or problem. Disliking needless banter as she does, once in awhile the girl shows a more 'human' side of herself. She does however consider the rare moments where she isn't compleatly emotionaless and hard as moments of weakness, and if observed will quickly cover them up.

Other bits of significant information

-Unlike many of her race, doesn't seem to show any special disdain for any particular race (though seems to blanket 'people' in general as the same, expendable resource, treating everyone like animals.)

-Seems to have contacts within various mercenary companies, Alliance and Horde alike, all over Azeroth. If not contacts, direct knowledge of.

-Seems to have a guilty pleasure for the rare drink 'Moonglow' sold around the Lunar Festival and will drink no other alchoholic beverage.

"Kill the horse to slay the rider. Shoot the weak to draw out the strong."

Retrieved from "https://wyrmrest.fandom.com/wiki/Archive:Agara_Boarheart?oldid=27918"
Community content is available under CC-BY-SA unless otherwise noted.