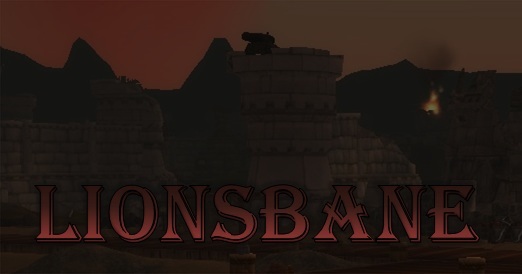 Alone I am but a single blade, bound by blood to slay my enemies. On this day I unite with my brothers and sisters in arms to forge an arsenal in defense of the Horde. Just as the wolves rally together or die alone, I too swear my life to our cause.

Alone I am but a single blade. Together as one, we shall be the bane of the lion.

Over the past few years, relations between the Horde and the Alliance have become strained. With no common enemy to reunite the factions, tensions reached a breaking point with the Battle of Theramore. With war comes a need to rise up and unite under a common banner in defense of the Horde. Thus Lionsbane was formed. Lionsbane is a military order dedicated to defending Horde strongholds and engaging the Alliance when the interest of the Horde is at stake. While everyone in Lionsbane has some fighting capabilities, individual members join one of three branches based on their skills and abilities. Not simply fighters, Lionsbane consists of many types of people including spies, historians, smiths, bakers, tailors and so on. With individuals from all walks of life, Lionsbane is considered to be self sufficient -- able to create their own supplies for battle, aid in rebuilding damaged buildings and structures, as well as function in day to day activities.

Lionsbane is divided into three branches: the Guardians, the Seers, and the Architects.

The largest of the three branches, the Guardians are fighters of all types including warriors, mages, medics and rangers. When reports of Alliance assaults arise, it is the duty of the Guardians to intercept the Alliance troops and engage them in battle.

The second branch of Lionsbane are the Seers. They are charged with gathering intelligence as well as the care and research of historical documents. While historians and scholars would be more likely to remain at a centralized location, spies and scouts would travel with the Guardians to combat or to intercept information regarding Alliance movements.

The final branch of Lionsbane, the Architects are comprised of individuals from all professions. Engineers and smiths aid in developing weapons, armor and siege machines for the Guardians to utilize in combat. Masons and carpenters are charged with rebuilding structures damaged during skirmishes. Tailors, bakers and fisherman provide crucial supplies and services for the everyday function of Lionsbane. While members of the Architects typically remain at a central hub of activity, they also have the ability to travel with the Guardians should their individual skills be required.

Fresh recruits of Lionsbane enter as a probationary member. These recruits will be watched closely by the council to make sure they understand and follow the rules and regulations of the guild. After a week’s time, recruits will be promoted to full member status.

Once the recruit completes the probationary period, they become Oathsworn. It is during this period that a member is asked to complete trials for each of the branches to determine which branch would best suit the individual's skills and abilities.

Following the completion of their trials, the Oathsworn is promoted Chosen indicating that they have selected their path as an Architect, Seer or Guardian. The Chosen are considered to be full members of Lionsbane.

These veterans of the guild are liaisons to the council. Valiants have proven their loyalty and worth and take an active roll in events. Members will be promoted to valiants following a series of tasks within their chosen branch.

The chief officers of the guild are called advisors. This first level of the council serves as a voice for the community as well as within the guild. They are mainly responsible for the administration of trials and quests to help members advance within the guild.

175 years before the opening of the dark portal, the towering spires of the magocratic city-state of Dalaran were an awe-inspiring vision to anyone who looked upon them. Dalaran, home to the Kirin Tor, was  comprised of 120 of the most skilled mages in all the lands. The ruling council, often referred to as the Council of Six, included the public face of the Kirin Tor as well as five archmagi whose identities remained anonymous with a few exceptions. It was a high honor to be even considered for membership into the Council of Six.

Upon the death of one of the Six, rumors flooded the streets of potential successors. Tybis Lyons, a human from Lordaeron, was a particularly hopeful prospect. Famed for both his proficient control of the arcane as well as his pure white hair, he quickly earned the nickname the White Lion of Lordaeron. An equally prospective candidate was a Highborne of Quel'Thalas by the name of Alandorian Sunflare.

Once considered brothers in arms, the relationship between Tybis and Alandorian grew strained

in the heat of competition. When previously they exchanged words of encouragement, now their interactions were heavy with dissonance and jealousy. In time, the feud culminated with the assassination of Tybis Lyons.

While never publicly charged with the crime, it was suspected that Alandorian landed the final blow that would slay Tybis Lyons and secure a position in the Council of Six. It was said that Alandorian sought out the most masterful weaponsmith in Quel'Thalas and requisitioned a dagger that would eventually be known as the Lionsbane.

Forged from enchanted elementium, legend states that the wielder of Lionsbane was able to fell even the most powerful foe with a single strike. The dagger itself consisted of a double-edged blade and gilded hilt with a rune carved into the pommel. When wielded by a practitioner of the arcane, it is said that the rune emanates a soft blue glow. The blade itse

lf was engraved with Thalassian words; the Common translation reading “The Bane of the Lion.”

After the death of Tybis Lyons, Alandorian Sunflare was never seen again. Some speculated that fear of the consequence of his crime caused him to flee in self preservation. Others stated he was stricken with grief that his jealousy drove him to kill a once trusted ally. Despite the justification for Alandorian's departure from Dalaran, further history of his life as well as the whereabouts of Lionsbane remain unknown.

Retrieved from "https://wyrmrest.fandom.com/wiki/Lionsbane?oldid=37040"
Community content is available under CC-BY-SA unless otherwise noted.