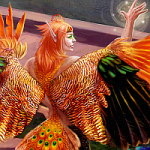 Things for my own reference/testing

Zandrae is a multiboxing RPer Raider who currently resides on Wyrmrest Accord-US. Most of his characters are Horde, but he does have a few (5) Alliance characters. He plays mostly Blood Elves, enough to make up for the fact that other people refuse to play Blood Elves and then some. It's almost a running gag.

Zan has many many characters, many of which started as NPCs while DMing that developed into full fledged characters. (This is a to-do list for profile making, this character list is not complete.)

House Pyreanor is a conglomeration of several families of characters played by a few players. in general this group Blood Elf survivors dwell in buildings located in The Bazaar of Silvermoon city where they operate a shop, several other businesses, and a boarding house.

These members of the Sunbrand family have merged into House Pyreanor.

The Snowdawn brothers are cousins to the aforementioned members of the Sunbrand family, with similar fates.

These members of the Alliance are also archaeologists. Cross-faction tomfoolery is afoot.

Illidari and their friends.

Zan has been roleplaying for more than a decade and a half and running plots as a Storyteller / Dungeon Master / Game Master for a little over a decade.

Along with the RP philosophies below, Zan's primary philosophy to DMing is elevation. Elevation is the idea of elevation is the purpose of a plot is to help the characters in said plot shine. The plot is about the players and giving them something meaningful and fun. Its not about the DM (or the DM's characters).

The more Zan knows about the players he's DMing for the better he can tailor situations around an individual's strengths and weaknesses, the more meaningful the RP can become.

When DMing Zan's characters are usually the foils and comic relief that help other players look good. He never uses character death as a plot device. He is available to run plots or provide NPCs for plots upon request.

Zan considers himself to be a decent roleplayer, not because of how many years he's been RPing, or DMing, or how long his poses are, but because of his roleplay philosophies. This is a brief representation of those philosophies.

There are two types of roleplayers, those that view roleplay as something competitive and play to win, and those that play for story.

The former are the types who insist upon character death, try to force damage on others, disallow others fair representation of skills, etc.

The later are players who want good, meaningful story. They wind up losing a lot, by principle, instead of pulling new skills and powers out of their rectums every time the haven't got the upper hand.

What the former doesn't realize is that the later is probably getting more fun and meaningful RP, and more frequent and better quality development of character than someone who winwinwins.

Losing is great, it builds character. Play to play, play for story, play to lose.

The Acronym "ICA=ICC" stands for In Character Actions yield (fair) In Character Consequences. This is a pillar of believable coherent realistic roleplay.

One application of this concept is that your characters shouldn't do things that would get them removed from play by the NPCs if someone like a DM was controlling them. Play as if being dragged off in irons for breaking a law is a very real threat. Nope to attacking someone or flinging offensive spells in a city, no exposing ones' self in public (I've seen people do this), etc.

Another application of this is to not engage in conflict causing behavior unless you are willing to reap the consequences. Talk crap get slapped.

In combat, players are expected to take fair consequences in the form of damage when they get hit instead of going neo and dodging all the things.

Consent is an idea that the only person who has the right to control a character is the player of that character unless permission has been granted otherwise. It is also the right to choose who you do and don't roleplay with.

If you come across someone that is playing something that you just don't want not play with, or you think it is in violation of canon, you're free to not do so, just like the children who play cops and robbers who take their ball and go home when a third kid shows up with a light-saber and wants to play Darth Vader. You can say "Nope!"

When you join a guild, you are, to some degree, opting into that guild's storylines and opting in to play with the other members of that guild.

When a player or guild approaches you and attempts to imply that they have some sort of authority over your characters, or claiming they own an area, or have power over you in some way, you don't have to opt in. These groups only have power and authority if you consent to them. You don't have to consent to the power of military guilds, noble guilds, etc or their players if you don't want to.

And if someone you thought you could trust turns out to not be so trustworthy you can always opt out later.

In combat, each character has his or her own skills and abilities and other players are probably not fully aware of them. Because of this, it is customary to allow other players determine what does and does not hit their characters and how it damages them.

In other words: Thou shalt not control another person's character.

Poses written in a tentative manner use words like "attempts to, moves to, swings at, jabs at, tries to", this implies that what actually happens is in the hands of the other player. This style of writing is a courtesy.

To claim what kind of damage is done to the other player without their consent is considered poor form. Its considered godmoding / powergaming / autohitting. It's not ok.

What if someone is abusing consent and going Neo on me?

Opt out. Abusing consent for the sake of never losing is considered poor form. Don't RP with people who do things in poor form.

As you control the fate of your character, you control if they lose a limb, become disfigured, or die.

Death is the end of a story and any good roleplayer knows this. Communicate privately OOC with other players OOC if your character is in a situation where they could die and arrange for a way to narrowly escape.

If someone refuses to work with you OOC for an ending that is preferable for both participants then you probably don't want to play with them. Opt out and run away.

An offensive action is anything that requires consent, from combat to having a character hug another (as the other character might want to dodge the hug).

This subversion comes from players who do multiple offensive actions per pose, especially when they're chained together.

The other player may feel overwhelmed having to reply to all of it, and if they manage to avoid the first step in the chain, or any step, the rest of the text is wasted.

The purpose of roleplay is to tell a story where two or more authors are interacting with their characters. Doing a single offensive action per post allows other characters the chance to respond.

A way to make posts more respondable is to cut them down and post smaller posts more frequently, like so:

The same can be done for speech. Typing a long-winded 11 full buffer monologue into an addon that extends your buffer and posting it all at once will likely result in TL;DR and people just not reading. But posting the same text with pauses allows for others to interject and makes for something much more interesting and interactive than a monologue.

When a player is highly immersed in roleplay it's not uncommon for the emotions of the character to run off onto the player. Just like people get excited watching sports, or let down when the home team loses the Super Bowl, RPers can feel excited, frightened, happy, sad, etc. It's normal, no you aren't crazy.

Sometimes, however, characters wind up in a situation that makes the player deeply unhappy. Suddenly they don't want to log onto their character, or they feel they can't.

Some players wind up killing said trapped character off, or worse, quitting the game because of it. It doesn't have to be that way. There is another way out.

Others continue to play in a situation that makes them miserable, and their character remains boxed in by the characters' very nature. They become a martyr in the name of good roleplay. This isn't healthy or sane.

Don't be a martyr. Don't make your character into a martyr. If you aren't having fun then it's time to make a change!

You can change the preferences of your character. Maybe your character hating X or being angry about Y is keeping you from RP? Change it. Or ask for help from your friends. Arrange to have something happen, to run a small plotline, to get some character development going that will disengage that character hook that limits you so that you can start having fun again.

Remember while it's everyone's job to help keep a storyline coherent and to conform reasonably to canon, you also owe it to yourself to have fun while roleplaying. It's what we're all here for, it's what we pay 15/mo for.

Many RPers are happy to help, if you're trapped, don't be afraid to ask for help.

Retrieved from "https://wyrmrest.fandom.com/wiki/User:Zandrae?oldid=37238"
Community content is available under CC-BY-SA unless otherwise noted.